It Was in the Stars: Mamarama Couldn’t Wait to Be Born

If you lived in Hudson County in 2001, you may remember the joy of public access television. School concerts with indiscernible audio, tedious city council meetings, and the mysterious Captyn Zodiac. A man, flanked by the flame of candles, wearing a New York Yankees skull cap, reciting astrological omens for each sign. It was strange, foreboding, hilarious, disconcerting, and perhaps, inspirational. Jayne Freeman, a new mom who had just moved to Jersey City, found herself mesmerized by his approach.

In 2001, Freeman had a 14 month old daughter and just found out she was pregnant. She was feeling lonely and disoriented after leaving her friends and support network in New York City. One night in her bedroom, she was flipping through the channels and landed on Captyn Zodiac. Imitating the local tv persona, she slows down her voice and deepens it until it’s a low, hypnotic whisper. “Aquarius this is a tough time for you, you like your solitude, but you’re going to have to get out there and make some connections…” she pauses. “And you’re just like ok, that could apply to anybody. It almost sounded like he was making it up off the top of his head.” she laughs. “I was like wait a minute, if this is what public access is like in NJ…I’m in, I have to do something! I could talk right into a camera, I could have better lighting! At least I have something more compelling to say, I could talk about pregnancy and childbirth.”

With her first daughter, Freeman had an all natural labor at a birthing center with midwives, unlike the majority of women in the United States who go through the typical hospital experience. “In Japan, Netherlands, Europe, Australia, everybody goes to midwives. For here, it was a little bit unusual and I was proud of that. I believed in the power of my body to give birth.” Since she was a little girl, Freeman was intrigued by the birthing process. She recounted old labor stories she heard involving shaving and enemas as a child and how she would recoil, thinking “that can’t be right!” 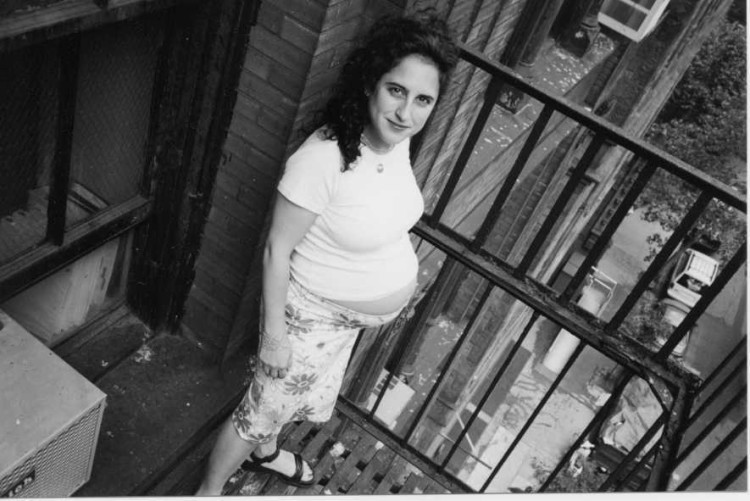 Within two years, Freeman was shooting and airing “Mamarama” a cable access television show about pregnancy, childbirth and early parenting. The show discussed breastfeeding, being pregnant and having a toddler, and and other issues mamas and new parents faced.

“It was like as though I was writing in a journal, but it was a video journal,” Freeman explains. As though she was compelled to do it, she shot her show while breastfeeding, or in a messy kitchen, in the midst of all the challenges and stains motherhood brings your way.

“There was absolutely no ego involved in this. I just wanted other women to know; “You’re not alone. We’re all suffering through this one way or another.'”

In 2006, Freeman left her husband and was hit with a huge stroke of luck. Two of her friends let her move into their beautiful home in downtown Jersey City while they weren’t living there. “It was the most amazing thing that ever happened to me and I’m very very grateful for my friends, for giving me that opportunity, almost too good to be true.” After moving downtown, Freeman was out, interacting with more people and discovering she was somewhat of a local celebrity. “I was getting recognized everywhere, people were like, “Hey it’s Mamarama! Hey I love your show!” she laughs.

Freeman never identified as Jayne Freeman on her show, she was only “Mamarama.” “When you do it that way, when you just talk into a camera and you’re 100% yourself, people really respond to that. They feel that they know you, that they have this automatic intimacy with you. It seems like you’re talking directly to them, you’re right in their world and environment on their television and computer.”

You get the sense from talking to Jayne about childbirth that this is exactly what she was put on this earth to do. As she relays the history of childbirth in the United States, she’s so animated and passionate you can’t help but become intrigued. As Jayne recounts the horrific early medicalization of childbirth, you’re almost relieved by the time we get to the early ’90s.

“As the decades went on, there was more awareness,” she explains. “Postpartum mood disorders become a distinct diagnosis, and you had lots people in the health field paying attention to it.” Freeman insists that in addition to recognition of any post partum disorders or afflictions, that being supported during the pregnancy is equally important and seeks to empower her students to ask questions and make decisions based on what is good for them.

“One of the things I say in my class is, this is not a medical emergency, this is not surgery. For example, you don’t walk into a hospital on the day you’re having open heart surgery and say, ‘I don’t want that kind of anesthesia’ or designing your room or making a surgery plan because those circumstances are unique to something that is wrong with you and something that needs to be fixed,” argues Freeman. “Birth is entirely different because it’s a physiological process that we have medicalized. From the beginning of time women have been able to do this physiological process on their own with the guidance of a capable woman by their side, which became a midwife.”

But how did Freeman go from a single parent of two girls with a local access cable show to a childbirth educator? 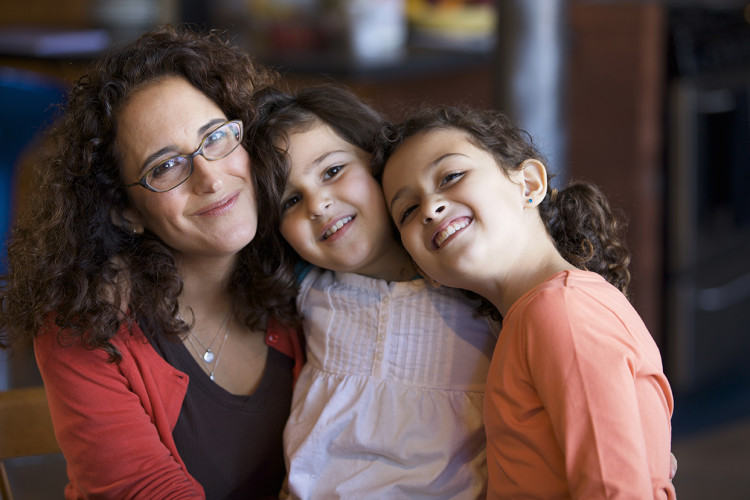 Since the inception of Mamarama, Freeman had been working at The Princeton Review. Around 2007, her colleagues were all in their late 20’s or early 30’s, at the age when many people get pregnant. The workplace was casual, without cubicles, so the employees could all interact and see each other. One day she found herself “holding court” and giving everyone advice from the knowledge she had acquired from producing Mamarama. “Everyone was asking questions, ‘what about this and why does this happen and why do women do this?’ And I was answering every single one of their questions, because I was doing the show, because I was doing research, because I had been reading a lot about these topics,” she recounts, with a big smile on her face. “I was having such a good time and I turned to my friend, Gretchen, and I said, ‘I could do this all day’ and she said, ‘Well then you should.” Freeman remembers a lightbulb went off in her head at that moment. “This is what I want to be doing.”

Being a single mom with a 4 year old and a 6 year old, Freeman at first thought the best thing to do was be a midwife, or a trained nurse who specializes in well woman care. After seeking answers from another midwife, she discovered she would need a nursing degree. The midwife suggested she attend some births and start out being a doula. A doula is not a clinician, but a offers a mother informational and emotional support before, during and after her pregnancy.

At her weekend training, Freeman had a passionate instructor with a powerful classroom presence. It dawned on her that she might want to be a teacher. Several months later, she was invited to a premiere of Ricky Lake’s “The Business of Being Born” film at Tribeca Film Festival. There, she ran into an old teacher of her’s from when she attended a new parent’s class at Elizabeth Seton in New York City in 2000. Her teacher convinced her to join The Childbirth Education Association of Metro New York (CEAMNY). At the same time, she was laid off from Princeton Review, which gave her the financial resources and time to pursue her teaching certification in childbirth education. Even though fate seemed to lead her right to her passion, it was still a difficult journey as a single parent to switch careers. 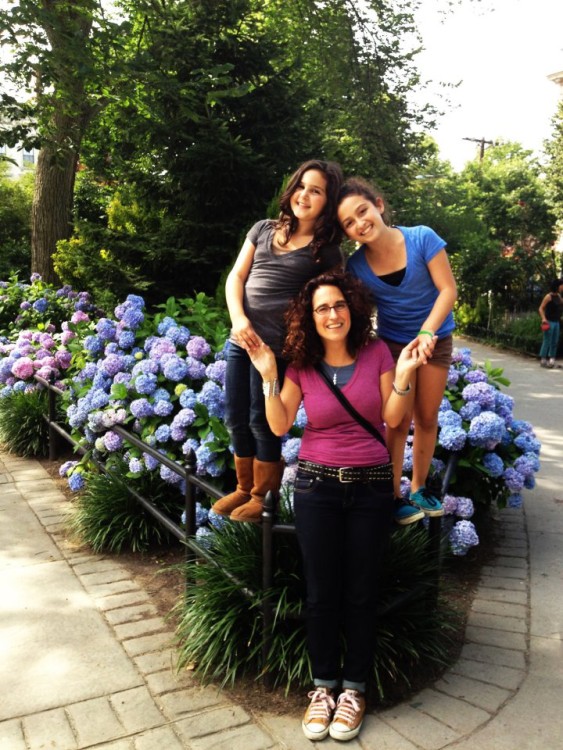 Freeman with her daughters in 2012. Photo by Rana Faure

“I tried everyway I could to make everything work so I didn’t have to go back to a corporate job. It was a combination of having a free place to live, I had money in the bank,” she explains. “I made it happen because I had a cushion, but then the cushion went away, and then there was definite fear. I was like what am I doing here? It was tough, it was scary. I just did whatever I could. I was writing for a moving company, a storage company, whatever I could piece together. I had to make it work.”

In 2016, Freeman is a full time childbirth educator, teaching for pediatric practices, for hospitals and she has her own private practice. “I’m at a stage now where I’ve been doing this for 7 years, I want to reach more people. I want people to be able to watch my class on their phone. I want women who are on bedrest who can’t get to a class to get good information. Now I’m on a mission to make my own business so I’m not beholden to a medical practice, or a hospital or a boss who’s going to be able to tell me when and where I can teach.”

Interested in taking a childbirth education class? Jayne will be teaching at Hamilton Health and Fitness starting in mid-May. Go to mamarama.tv for details! Keep up with discussions on pregnancy, childbirth, and new parenting with new episodes of Mamarama every Wednesday night at 10 pm on local access Channel 51. If you’re interested in being a part of the show, or working on production, contact jayne@mamarama.tv!